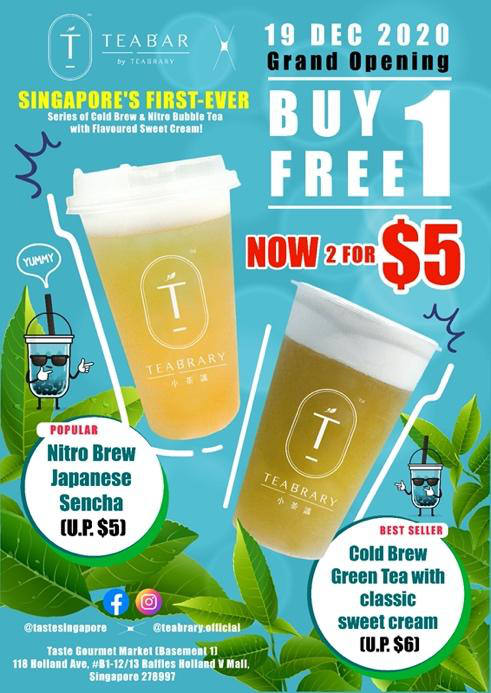 TEABAR launches Singapore’s first-ever series of nitro bubble tea with flavoured sweet cream. These beverages are innovative and Insta-worthy! The new concept is born out of Teabrary, a tea studio founded by host and entrepreneur Vivian Lai.

Bubble tea lovers can tailor their own nitro bubble tea with flavoured sweet cream combinations at TEABAR. A total of 5 exclusive sweet cream flavours – The Original (Vanilla), Lemon-li-cious, Azuki “Hong Dou” Beans, Strawberry Goodness and Distinctly Lemongrass will also be available at the concept, allowing for different and interesting permutations with TEABAR’s Cold Brew and Nitro Brew Taps. Each sweet cream is made with premium Meiji’s deluxe milk, fresh ingredients and no preservatives.

For one day only on 19 December, TEABAR by Teabrary will be having an all-day long in-store Buy 1 Get 1 FREE promotion at only $5:

· Purchase the Nitro Brew Japanese Sencha (UP: $5) and get the Cold Brew Green Tea with Classic Sweet Cream (UP: $6) for FREE!